It's hard to explain how sad his (apparent) suicide makes me feel.

I've read a lot of DFWs work, but I will not try and describe him in terms of his place in the hall of American letters -- there are others of far more secure academic standing who can (and surely will) do that far better than I'd ever manage. Just glancing at the names most often mentioned in comparison says all one needs to know about the man's stature and standing: you don't get compared to Joyce, Pynchon, or Coover lightly or without hellacious cause.

Instead of trying to explain Wallace by what he was everywhere else, I'll instead say what he as for me: easily the most volcanic and thrilling wordsmith I have ever had the pleasure to read. 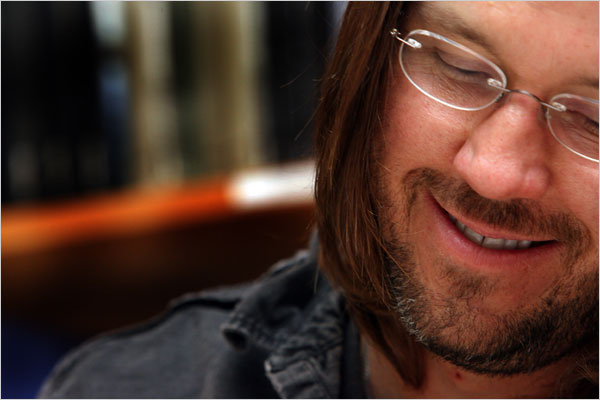 While I can't claim to have loved his every work -- his epic modern classic INFINITE FEST, for example, seemed like it was defiantly in need of a tough editor, and Wallace was just curious to see if anyone had the balls to say so -- I can state this much with conviction: never did I read anything from David Foster Wallace where I didn't (at least a few times and usually very many) just smile and shake my head in jealous marvel at the way the man could make words dance on the wind; where I didn't say to myself "man, I really need to sharpen my A-game unless I wanna look like a dyslexic chimp by comparison"; where I didn't want to just stand and scream "NOW THAT'S HOW YOU MOTHERFUCKING SLING THE LANGUAGE AROUND!"

The guy was a walking bag of contradictions: raised in "Normal, Illinois," he became the Next Great American Literary Legend, yet he seemed absolutely dedicated to shooting holes in his own legend as often as possible. He'd pen travel articles for magazines even as he was working on epic literary works. He could make make a totally average member of the pro tennis tour somehow seem heroic and tragic, then pen a piece of literary criticism where he made all modern fiction seem like the most flimsy and useless waste of ink ever attempted. He was the hermit king who avoided all acclaim and notoriety, opting for a horsehair shirt teaching post in Pomona -- Pomona! -- rather than a comfy endowed chair at some storied ivy draped "name" institution.

And this past week, at age 46, for reasons not yet clear, he decided to hang himself and deny us any more of his wild brilliance.

All I know is that it will be a long long time before we're likely to have anyone with his rare skill -- his ability to somehow seem both sacred and profane, profound and mundane, romantic yet nihilistic, all even in the same sentence -- pass our way again.

God, how I will miss the chance to see what else he might ever have written. It surely would have dazzled, that much I know for absolute certain.
.
.
.
selfishly sad B
Posted by aggiebrett at 10:58 PM

I am really sad DFW killed himself. I liked his fiction, but it was a little out there for me. Where I really connected with him were in his essays. The title essay in "A Supposedly Fun Thing I'll Never Do Again" about his week on a cruise ship that he wrote for Equire (or Harper's, I forget) is one of the funniest things I've ever read. I've always hated the idea of being stuck on a cruise ship and have always passed when I've had the opportunity to go. Reading his essay hit it home - a smarter, funnier person from my camp was caught in what I consider hell and was reporting back that it was indeed as bad as I imagined.

I wonder what drove him to despair?

What's weird is that my wife went on a cruise last week, and she came back raving about how much fun she had while also laughing herself silly at knowing full well how miserable I would be in the same situation. I mentioned "A Supposedly Fun Thing..." then and she laughed to agree, as it was the only DFW piece she had ever read.

In 2005 Wallace gave a commencement address to Kenyon College, and this excerpt has been making the rounds upon news of his passing:

"Learning how to think really means learning how to exercise some control over how and what you think. It means being conscious and aware enough to choose what you pay attention to and to choose how you construct meaning from experience. Because if you cannot exercise this kind of choice in adult life, you will be totally hosed. Think of the old cliché about, quote, the mind being an excellent servant but a terrible master.

"This, like many clichés, so lame and unexciting on the surface, actually expresses a great and terrible truth. It is not the least bit coincidental that adults who commit suicide with firearms almost always shoot themselves in: the head. They shoot the terrible master. And the truth is that most of these suicides are actually dead long before they pull the trigger."

The guy always seemed painfully aware. That was one of the strengths of his writing, and quite possibly one of the causes of his tragic suicide.
.
.
.
B

My friend sent me this link - I'm 9 minutes in and I thought you'd probably be interested:

Yeah, this is crushing. And I totally agree - really amazing how someone can be so complex, so cryptic in some respects - and yet always be entertaining and FUNNY.

He will be missed, big time.