Can you see that you will always be my friend?

So today is April 21, which is San Jacinto Day, the day that Texas won her independence from Mexico in 1836 when General Sam Houston's forces surprised and defeated the hugely superior force of General Antonio Lopez de Santa Anna. And San Jacinto Day also happens to be the day of Aggie Muster, a sacred occasion when Aggies worldwide gather and remember fallen comrades and friends. If you're an Aggie, it's among the most solemn of all traditions.

Today I spent the day with my two younger kids, off on a school trip which is largely irrelevant to this post except to say if there was any doubt (and there ought have been none), a howling Merlin engine on a low-level *does* in fact harmonize beautifully with a children's choir.

It was a gorgeous glorious day, and a good time was had by all. We drive back in time to catch The Wife on the patio at our local Tex-Mex place, as she's heading to work, and we scarfed down the last of her chips and salsa and hugged her goodbye and then headed on home ourselves.

The kids headed out to play, so I plopped down to sneak in a few minutes work on a long-simmering script project: basically a thinly reworked heavily auto-biographical revisitation of the idiocy of my college days at A&M. And as I am making some changes to the final "curtain call" sort of scene, I hear the music from the final scenes of DANCES WITH WOLVES, and I immediately recognize it as that incredibly awesome moment when Wind In His Hair says goodbye to Dances With Wolves by shouting from the top of the valley overlooking his friend and the rest of the tribe: 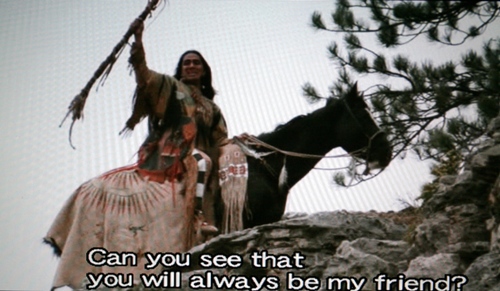 And I'm sitting there hearing that scene in my head as I write about my own best friends from college -- some of whom are tragically no longer with us, and some of whom I remembered *at* Muster ceremonies in years past -- and it's April 21, Muster Day, and I'm drinking a Shiner Bock exactly as I did those many years ago when the scenes and memories in my screenplay were not just lies on a page but actual people and events and exchanges and (alleged) offenses, and somehow it's all just too damned perfect, so all I can do is lean back teary-eyed but smiling, and give a beer toast to the sky:

And to all you DG idiots, rejects and defectives who helped make worth remembering what in lesser hands might have been only moments of justifiable shame, I say "thanks for the (plausibly deniable) memories."
.
.
.
maroon-tinted glasses B
Posted by aggiebrett at 7:38 PM

Email ThisBlogThis!Share to TwitterShare to FacebookShare to Pinterest
Labels: Aggies, crimes and offenses and other trivial fictions, DG, muster, Wind In His Hair